I would meet Mike at the bus station in town at 2:00 A.M. How two young suburban teenagers got out in the middle of the night to go to Brooklyn is still a mystery to me. I guess times have changed. There weren't any child molesters or kidnappers, no drug related murders, or at least you didn't hear about them. Gangs, yes- but a "rumble" was with fists, sticks, switchblades, and sometimes a zip gun (a far cry from an "Uzzie"). Gangs were mainly concerned with protecting their turf. I guess we heard about an occasional rape, but we didn't get all the frightening details on the news. "Homos", although feared, were very rare indeed.  Yes, the times and attitudes have changed, some for the worse and some for the better.
Mike had a crewcut , but he was cool. He achieved this by wearing a black leather motorcycle jacket with the collar up and combat boots. As for me, I wore my best tight black casino pants and a pink shirt, with pointy Flagg Brothers shoes, "roach killers", the ones with white wings on the side. My pompadour was set, I used a combination of crewcut wax and Dixie Peach palmade, the stuff I had heard advertised on the R&B station (Dr. Jive and Jocko's Rocket Ship way down on the end of the AM dial). I was really ridiculous! We were ready to rock. 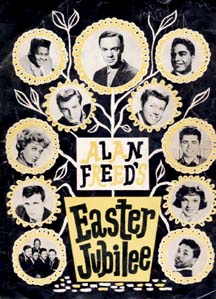 We took the #40 bus to the port authority bus terminal at 178th street and a train to Times Square. That used to be our stop, but after the riot in Boston, Alan Freed moved his shows back to Brooklyn. Now we would continue underground, not at all aware of the complex and diverse culture above us that had contributed to this new music that we were so excited about. Onward to the DeKalb Avenue stop, up the stairs and a few blocks under the streetlights, and there it was, "Alan Freed's Easter Jubilee of Stars" at the Brooklyn Fox Theater!
The show would run for ten days. There were five shows a day noon through midnight. Each show was preceded by a B movie. When we arrived at 3:30 A.M. The line was already a half a block long. The mounted police hadn't arrived yet, but the barricades were up to contain the teenagers to the sidewalks. It was a strange scene in the twilight, all these kids, black, white, hispanic, all with a common thread binding them together, The Music!

And everybody was there- All the Rock and Roll stars- sometimes over 20 acts in a show! All for $2.50. No, they didn't play long sets- you would never be bored for a minute- every act came out and did their two or three best hits and went right off leaving the crowd dying for more. All the great groups: Frankie Lymon and the Teenagers, The Moonglows, Dion & The Belmonts, The Cleftones, and the Skyliners. Real Rockabilly from Buddy Holly, Jimmy Bowen, Buddy Knox, the Everly Brothers, and Jerry Lee Lewis. The great closers: Little Richard, Bo Diddley, 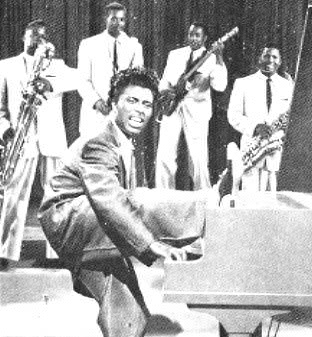 Chuck Berry, and Larry Williams. The exciting acrobatic dance routines of the Isely Brothers and The Olympics. The class acts glowing under magenta spotlights: Little Anthony and the Imperials, Patti LaBelle and the Bluebelles, The Flamingos, and the Chantels. The sexy Ronettes and Joanne Campbell. And who could forget Screamin' Jay Hawkins, Jackie Wilson, and Fats Domino!!! They would all be backed up by the Alan Freed "Big Beat Orchestra" led by Sam "the Man" Taylor.
We would stay for at least two shows, sometimes three. For the second show we would move up to the second or third row. On the third pass we had most of the lines in the B movie ("Pancho Villa") memorized. This would pass the time. Then we would shift to the balcony for a different perspective.
The audience was warm, that great stew of black, white, hispanic- juvenile delinquents, rah rahs- rich, poor- you name it. And Mike and I, a Jew and an Italian from the suburbs. During one finale, I believe it was "Hey Bo Diddley", the place was really rocking- dancing in the aisles- security in front of the stage, and I looked at the girl who was sitting next to me and noticed that she was physically impaired- no right hand. She was beating her wrist on the chair wildly to the rhythm, totally uninhibited. It took me back for a moment, but I knew she was all right- thanks to Bo! 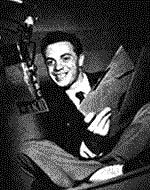 Alan Freed was the first to expose R&B to the mass white teenage audience. He later mixed in  white artists and called it all Rock and Roll! This integration was disturbing to many people. Eventually, Alan Freed was destroyed by the racist establishment. He became a scapegoat in a payola scandal that was really aimed at Rock music, since the practice of D.J.s taking money for playing records on radio had always been common practice. This- combined with the death of Buddy Holly, the Jerry Lee Lewis scandal, and Little Richard resigning to the ministry- was a low point for Rock music in America. But, the music had already become too much a part of the world pop culture to fade away. The Beatles had heard the news and were ready to take it to a new level.

The contrast between these early shows, and modern day concerts is obvious. The most striking difference is the fragmentation that has occurred. Generally speaking, there are too few white kids at R&B and Rap concerts, and even less black kids at "Alternative" concerts. The white artists often display a seemingly intentional absence of soul, and hard-core rap music is so extreme, that white kids feel alienated by it. What would Sam Cooke say? Where is the spirit of Woodstock and Monterey Pop?

In the fifties, when Elvis Presley and Chuck Berry married the Blues with Country, the result was fresh and exhilarating. Popular music fans were brought together by this new music that bridged social status and ethnicity. Then, in the sixties it really exploded. Rock was now open to be influenced by just about any form of music and philosophy. The rock generation was growing up. The ongoing social injustice and the absurdity of the Viet Nam War became the immediate business at hand. Bob Dylan redefined the art of lyric writing and the popular song would never be the same. This pop cultural revolution climaxed with Woodstock. From the Brooklyn Fox to Woodstock, it was a great ride with high hopes, but with it came the drug culture with all the tragic stories of career ending dependency and overdose. The "American Dream" was becoming the "American Nightmare".

And somewhere along the line, Rock split into specific genres that tend to be more and more inflexible. Is it purism or bigotry? Tolstoy spoke of true art being accessible to all people, thus promoting brotherhood.  That seemed to be Rock's greatest strength. Perhaps it is a period of transition, refining the basic elements, about to re-emerge stronger than ever.  I surely understand the "erasing of the blackboard" in order to redraw the big picture. Youth will always make a valiant effort to find new music and ideas that will make their parents cringe. This is a natural occurrence. There are positive signs as we enter the new millennium; the new folk and R&B coming together with pop in the diverse top 40 radio that is emerging- young people reflecting on the peace, love, and understanding of the 60's, - working together to stamp out hate and re-emphasize the HARMONY.............. Alan Freed, wherever you are- The dream is still alive-
Long Live Rock and Roll!